Human rights​ are moral principles or norms[1] that describe certain standards of human behaviour and are regularly protected as natural and legal rights inmunicipal and international law.[2] They are commonly understood as inalienable,[3] fundamental rights "to which a person is inherently entitled simply because she or he is a human being"[4] and which are "inherent in all human beings",[5] regardless of their nation, location, language, religion, ethnic origin or any other status.[3]They are applicable everywhere and at every time in the sense of being universal,[1] and they are egalitarian in the sense of being the same for everyone.[3] They are regarded as requiring empathy and the rule of law[6] and imposing an obligation on persons to respect the human rights of others,[1][3] and it is generally considered that they should not be taken away except as a result of due process based on specific circumstances;[3] for example, human rights may include freedom from unlawful imprisonment, tortureand execution.[7] 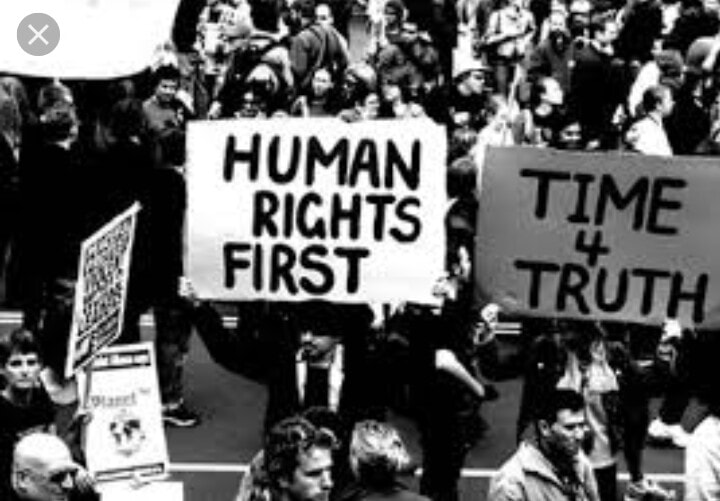 Many of the basic ideas that animated the human rights movement developed in the aftermath of the Second World War and the events of the Holocaust,[6]culminating in the adoption of the Universal Declaration of Human Rights in Paris by the United Nations General Assembly in 1948. Ancient peoples did not have the same modern-day conception of universal human rights.[14] The true forerunner of human rights discourse was the concept of natural rights which appeared as part of the medieval natural law tradition that became prominent during the European Enlightenment with such philosophers as John Locke, Francis Hutcheson andJean-Jacques Burlamaqui and which featured prominently in the political discourse of the American Revolution and the French Revolution.[6] From this foundation, the modern human rights arguments emerged over the latter half of the 20th century,[15]possibly as a reaction to slavery, torture, genocide and war crimes,[6] as a realisation of inherent human vulnerability and as being a precondition for the possibility of a just society.[5]

Human rights advocates agree that, sixty years after its issue, the Universal Declaration of Human Rights is still more a dream than reality. Violations exist in every part of the world. For example, Amnesty International’s 2009 World Report and other sources show that individuals are:
Not only that, but women and children in particular are marginalized in numerous ways, the press is not free in many countries, and dissenters are silenced, too often permanently. While some gains have been made over the course of the last six decades, human rights violations still plague the world today.
To help inform you of the true situation throughout the world, this section provides examples of violations of six Articles of the Universal Declaration of Human Rights (UDHR):
ARTICLE 3 — THE RIGHT TO LIVE FREE
“Everyone has the right to life, liberty and security of person.”
An estimated 6,500 people were killed in 2007 in armed conflict in Afghanistan—nearly half being noncombatant civilian deaths at the hands of insurgents. Hundreds of civilians were also killed in suicide attacks by armed groups.
In Brazil in 2007, according to official figures, police killed at least 1,260 individuals—the highest total to date. All incidents were officially labeled “acts of resistance” and received little or no investigation.
In Uganda, 1,500 people die each week in the internally displaced person camps. According to the World Health Organization, 500,000 have died in these camps.
Vietnamese authorities forced at least 75,000 drug addicts and prostitutes into 71 overpopulated “rehab” camps, labeling the detainees at “high risk” of contracting HIV/AIDS but providing no treatment.
Human Rights First (HRF), formerly known asLawyers Committee for International Human Rights, nongovernmental organization founded in New York City in 1978 to defend human rights worldwide. HRF aims to promote laws and policies that protect the universal freedoms of all individuals—regardless of political, economic, or religious affiliation. The organization is headquartered in New York and Washington, D.C.
HRF seeks to protect the rights of people at risk, including political refugees, victims ofdiscrimination and crimes against humanity, and human rights advocates who are persecuted for their attempts to protect the rights of others. The group works to hold the governments of all countries accountable for enforcing the standards of the Universal Declaration of Human Rights (1948), theInternational Covenant on Economic, Social and Cultural Rights (1966), and theInternational Covenant on Civil and Political Rights (1966), collectively known as the International Bill of Human Rights.
HRF issued reports and sponsored campaigns on a wide range of concerns, including hate crimes in Europe and the United States, the persecution of civilians in the civil war in Sudan, and the treatment of prisoners held by the U.S. military in Iraq and Guantánamo Bay, Cuba. The group also criticized China’s record on workers’ rights and the arrest of Chinese labour activists